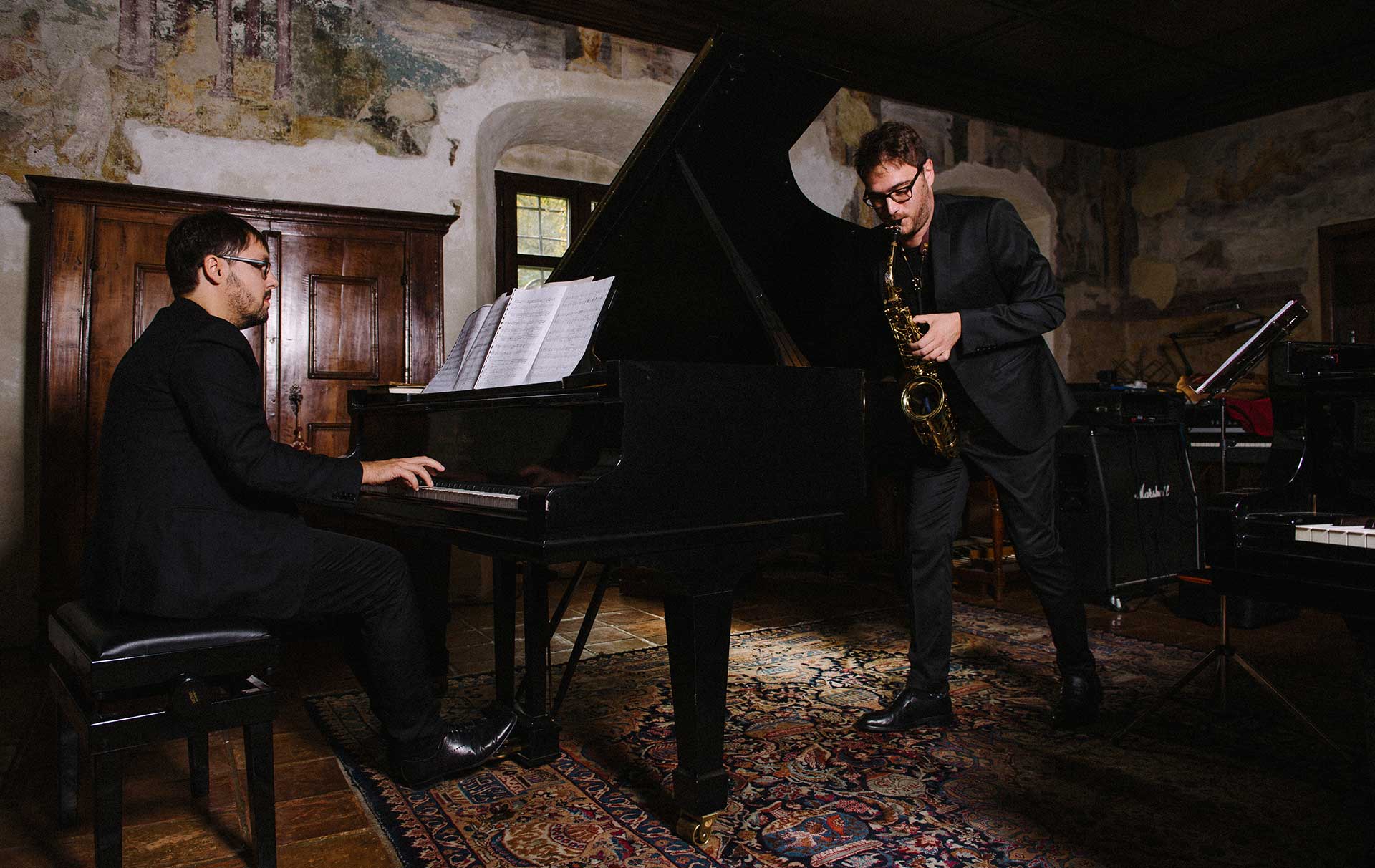 The Duo Granato is an eclectic chamber music group consisting of Cristian Battaglioli (saxophone) and Marco Rinaudo (piano). Together the two artists have been able to approach the chamber music repertoire for saxophone and piano with an accurate research on timbre and sound quality, finding a new balance between the two instruments. The musicians have been focusing on the blending of sounds that is possible between the very special harmonic range of both instruments.

The repertoire of the ensemble consists of music from all over the world from composers like Desenclos, Creston, Muczynski, Hindemith, Yoshimatsu, Maslanka, Albright and many more that have written original works for saxophone and piano. Also transcriptions are often played for a concert experience that convince any audience.

In 2015 the Duo won the first prize at the International Music Competition Città di Padova. As part of the same competition, the Duo was awarded the Premio Città di Padova, being the first Italian ensemble to receive this recognition.

In 2016 the group won the second prize at the Premio Internazionale Gaetano Zinetti (Sanguinetto – Verona, Italy) in the ensemble category.

In 2016 the Duo is admitted to the semi-finals of Boulder Chamber Music Competition in Boulder (Colorado – USA).

The esemble has played for many festivals all over Italy, such as Setenovecento, Accademia Discanto, WAM Festival Mozart, Agimus Padova, Classic and More, SaxArts Festival, Museo di Palazzo Reale Genova, Alpen Classica Festival and many more.

The Duo released its first CD Desert Sketches in 2015, recording music of Creston, Ibert, Van Klaveren, Muczynski and Rota-Ceschini, which was presented on the Radio channel RAI Radio 2 by Paolo Mazzuccato. In 2018 the new CD "Soliloquy for Two" was released, containing music by Sollima, Piazzolla, Rota and many more. Prizewinner at the “Premio Claudio Abbado” 2015, five times he was given a scholarship at the “International Saxophone Festival SaxArts” of Faenza.

He has performed with orchestras such as the “Petruzzelli Orchestra” of Bari, “I Pomeriggi Musicali” of Milan and the “Haydn Orchester von Bozen und Trient”. He has worked with conductors such as Daniele Rustioni, Titus Engl, Jonathan Webb and Jean Deroyer.

Cristian had the possibility to perform on stage in different chamber music settings with world-renowned saxophonists such as Branford Marsalis, Federico Mondelci and Russell Peterson. Marco Rinaudo was born in 1983 in Trento, where he graduated in piano with distinction at the Conservatory F. A. Bonporti under with Prof. Mariarosa Corbolini. At the same conservatory Marco received the master title with highest marks.

He attended the International Academy TEMA in Milan for the contemporary chamber music course with Prof. Antonio Ballista, which he graduated with 100/100.

He has participated in numerous national and international competitions such as "Città di Albenga" (Albenga, Italy), "Città di Cesenatico" (Cesenatico, Italy) and "Giulio Rospigliosi" (Lamporecchio, Italy) both as a soloist and in chamber music settings.

His concert activity is very intense and varied. Already during his studies, Marco won a competition to play as a soloist with the Haydn Orchestra the 1st concerto of S. Prokoview and Salvatore Sciarrino wrote for him a cadenza for the Piano Concerto K 491 of Mozart, which he performed as a soloist.

In addition to his concert career, Marco is an accompanist and regularly works at the Conservatory of Trento and Bolzano.

He played for various concert events such as Sala Aperta, Invito all'Ascolto, Concerti della Domenica, Festival Musica 900, PergineSpettacoloAperto, Mondi Sonori, Trento Estate, Estate in Musica, Classic and More, Forum Musik di Caldaro and many more, and with the duo Granato Marco performed in many Italian cities such as Venice, Padua, Genoa, Rovereto, Trento, Bolzano and many others.